The 10 Best Teas That Give You Energy 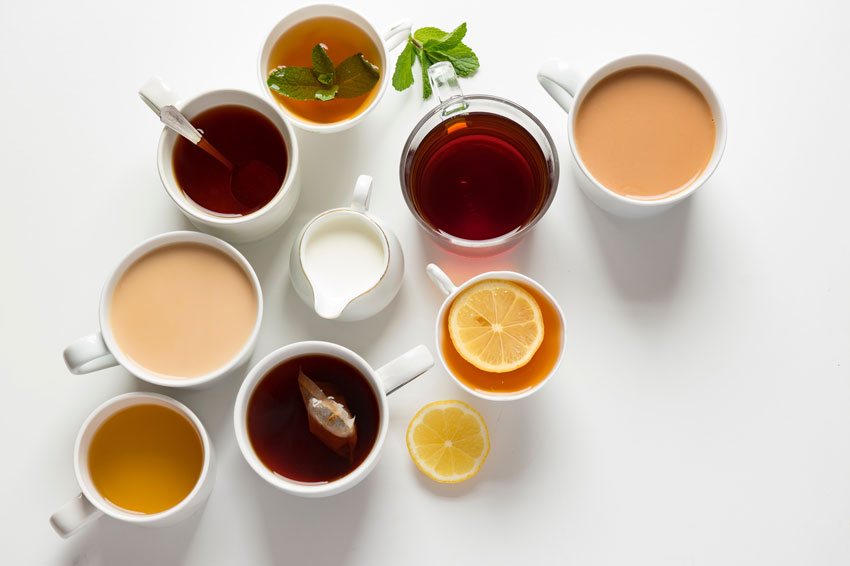 Every evening when I come home from my day job I sit down to begin working on my side projects. Sometimes these projects are my own ventures, while other times I am working on fun and interesting freelance work for my clients. While I ultimately find these opportunities to be especially interesting to me, I often feel burnt out and tired after work. Consuming more coffee or a drink with caffeine is not an option, however, or else my quality of sleep that night will be significantly reduced. Instead of sacrificing quality sleep or powering through a project with reduced energy, I’ve learned to reach for both herbal and non-herbal teas that provide sustained energy with far lower (or inexistent) levels of caffeine.

Why Choose Teas for Energy?

While I enjoy both tea and coffee (depending on the time of day), there are plenty of tea drinkers who choose this option because they can’t stand the taste of coffee. Others are looking for an energy boost from a fully herbal option that’s free of caffeine altogether. No matter your reason, there are plenty of incredibly healing and nutritious teas to choose from that can offer the mind a source of focus, concentration, and energy.

Should I Choose a Green, Black, White, or Herbal Tea for Energy?

When choosing the right tea for you, it’s important to consider your desired outcome and how caffeine tends to affect you. If you have an extreme caffeine sensitivity to the point where consuming anything with the slightest amount of caffeine after 5pm will keep you up all night, perhaps an herbal tea for energy is right for you. Perhaps you’d prefer something with low levels of caffeine that also includes herbal substances that provide healing benefits. Or maybe you want a tea with higher levels of caffeine comparable to that of coffee, but something with a pleasant, aromatic taste.

Many people don’t know that caffeine is not the only naturally-occurring substance in teas that can provide the human brain with sustained levels of energy and alertness. In fact, many herbs offer similar benefits while also supplying the body with powerful antioxidants that can ward off disease.

So, no matter goal, there are 10 different teas that give the body energy, focus the and will set you up to tackle your day.

Guayusa tea is first on our list – a naturally-caffeinated herb that comes from the holly tree, native to parts of the Amazon Rainforest of Ecuador. This tea has a rich history steeped in the Amazonian culture for over 2,000 years, and is renowned for being rich in antioxidants and nutrients. As for caffeine level, Guayusa contains approximately 100 milligrams per standard 8-ounce cup (1). This is about the same compared to a standard cup of coffee.

However, Guayusa’s effects on the body differ from coffee such that it is less likely to produce the caffeine jitters that coffee sometimes causes. This is in part due to the harmonious balance of caffeine, antioxidants, vitamins, and amino acids that Guayusa contains. One amino acid known as L-Theanine is found in high levels in Guayusa, known for relaxing the mind and body without causing tiredness or fatigue. As for taste, Guayusa is both smooth and earthy with a slightly sweet finish. Some describe is as having a complex fruity flavor as well.

Guayusa is probably best suited for those who aren’t as sensitive to caffeine, or for consumption in the morning for those who find it hard to fall asleep when taking caffeine late in the day. Given its highly beneficial balance of nutrients and antioxidants, Guayusa is perfect for anyone seeking a balanced and sustainable source of energy.

In recent years Yerba Mate has exploded onto the mainstream market due to its impressive levels of antioxidants and balance amount of caffeine. It has slightly less than both Guayusa and coffee, clocking in at 85 milligrams for a standard 8-ounce cup (2). However, when it comes to antioxidants, Yerba Mate actually contains slightly more than your average green tea, which can help clear the bloodstream of free radicals and reduce the risk of cancer (3). In addition to antioxidants, Yerba Mate contains a number of beneficial plant nutrients such as (4):

While Yerba Mate contains less caffeine than a cup of coffee, it is still more caffeinated compared to black tea, and therefore should be taken by people with caffeine sensitivities in the mornings to reduce the risk of sleeplessness.

Black tea is a classic in many American households, but is far more popular overseas in England and other parts of the UK. While it can be enjoyed in its purest form as regular black tea, it is often blended with other plants or herbs to produce variant flavors, such as Earl Grey or Chai. Similar to Yerba Mate and Guayusa, black tea also contains high levels of antioxidants which can promote overall health and reduce cell damage from free radicals (5). Black tea is not only enjoyed for its benefits on energy and alertness, but has also been researched to produce an 11% reduction in the risk of developing heart disease (6).

Compared to Yerba Mate or Guayusa, black tea has significantly less caffeine at about 45 milligrams per 8-ounce cup (7). That being said, people with caffeine sensitivity should still be advised to reduce black tea intake after about 6 or 7 pm. For me, I prefer to have black tea later in my day at about 3 pm to reduce the lethargy I generally feel after eating lunch.

Ahh, green tea. This classic drink is extremely popular all over the world, especially as a drink consumed alongside many Asian cuisines. It is loaded with antioxidants, nutrients, and amino acids that prove to be extremely healthy for humans, especially in protecting cells against damage and inflammation. For example, green tea contains polyphenols – a powerful antioxidant that plays a role in reducing the signs of aging and inflammation (8). This tea also contains levels of Epigallocatechin Gallate (EGCG), which is known to lower bad cholesterol and lower blood pressure (9). Also, due to its ability to boost metabolism, it has also been studied to reduce fat in humans (10).

As for increasing alertness, although green tea doesn’t contain as much caffeine as coffee, the synergistic effects of the L-Theanine, antioxidants, and balanced levels of caffeine it contains supports a more sustained feeling of energy. As for caffeine amount, green tea contains about 25 milligrams for every 8-ounce cup – 20 milligrams less than black tea (11). This makes green tea safer to consume later on in the day for those with caffeine sensitivities, or as an excellent morning beverage.

So what makes white tea different than green or black tea? After all, all three teas are derived from the Camellia Sinensis plant. Well, white tea is picked before the leaves and buds of the plant are fully open – in fact, at this stage the buds should be covered in tiny white hairs, which is how white tea gets its name.

Compared to black and green tea, white tea is the least processed of the three. It therefore contains a large amount of antioxidants naturally found in the plant, which has shown benefits in reducing the risk of heart disease, skin aging, and even weight loss. In fact, studies have found white tea powder to be extremely effective at reducing inflammation caused by free radicals in skin cells (12). It also contains similar levels of L-Theanine and other beneficial amino acids compared to green tea, also providing the body with a myriad of health benefits.

As for caffeine content, white tea contains slightly less than green tea at about 15 milligrams for every 8-ounce cup (13). This gentle amount is ideal for people looking for low doses of stimulation with the added benefit of relaxed focus that comes with the levels of L-Theanine found in white tea.

Next we will review the herbal teas used for energy. Believe it or not, there are more factors at play than just caffeine alone, especially when it comes to focus, concentration, and motivation.

With a plethora of immune-boosting health benefits and anti-aging properties, it’s no wonder that Astragalus has been used in traditional Chinese medicine for centuries. While it is often extracted into powder supplements and liquid extracts, it is arguably most commonly consumed as a tea. Like green tea and Guayusa, Astragalus contains many active compounds such as antioxidants that are known for strengthening the immune system and reducing inflammation (14).

As for providing the body with sustainable energy, research has found that Astragalus significantly reduces fatigue and can altogether increase longevity and performance in the long-term (15).

Nettle tea is yet another staple in herbal medicine, dating back to ancient Egypt where it was used to treat arthritis and lower back pain (16). It contains many essential nutrients that provide a number of benefits to the human body and brain. These include:

In addition to these nutrients, nettle also contains polyphenols and pigments. These substances come together to provide substantial antioxidant benefits within the body, acting as a layer of protection against other substances that cause cell damage.

Many herbalists recommend drinking nettle tea as your start to the morning, given the kick of minerals, nutrients, and vitamins it provides to the body so early in the day. These substances can help balance metabolic functions and our ability to absorb nutrients by aiding in digestion, which can help provide the body with sustained energy throughout the day.

Although Ashwagandha is not your typical steep-and-pour tea, the health benefits of this herb are so powerful and profound that we thought it would be a disservice to withhold it from this list. This herb is a staple in ayurvedic medicine – an ancient system of holistic Indian medicine that incorporates many herbal supplements into the practice. Due to its significant anti-inflammatory properties, it is classified as an adaptogen, or an all-natural substance that helps protect the body from stress.

As for improving energy levels, Ashwagandha’s use for concentration and focus dates back to over 3,000 years (17). Alongside the benefits Ashwagandha provides for reducing stress and inflammation, it has also been researched to significantly improve reaction time and cognitive task performance (18). Additionally, other research has displayed Ashwagandha’s benefits on overall memory recall and attention (19).

Since Ashwagandha is consumed as a dried root, it is most often mixed into hot water in its powdered form and taken as a tea.

Ginseng has been used for centuries in traditional Chinese medicine, and contains a high concentration of active compounds that is known for both relaxing and invigorating the body. Similar to many of the others teas listed here, Ginseng is heavy in the antioxidant department, and is widely used as an anti-inflammatory agent (20). Additionally, Ginseng is also commonly enjoyed for its wide array of cognitive benefits, especially with regard to behavior, mood, and memory (21).

As for increasing energy levels, Ginseng contains certain compounds such as polysaccharides and oligopeptides which are known for producing higher energy functioning within bodily cells (22). In effect, this results in less fatigue and tiredness, while offering more sustained energy throughout the day.

When it comes to herbal tea, peppermint is probably the most common household standard across the board. While it is often blended into harmonious triaged teas, it is wonderful in its pure form as well, drunk not only for its flavor but also for its significant health benefits. For example, research has shown that peppermint is an extremely potent agent for those suffering from the onset of a headache (23). Additionally, peppermint tea has also been found to be effective in reducing menstral cramps for women (24).

As for sustained energy, other research has shown that regular peppermint supplementation produced less fatigue for individuals performing cognitive tasks (25). But those benefits don’t stop there – even the aroma of peppermint is known to reduce fatigue and sleepiness. One study found that peppermint oil aromatherapy significantly reduced daytime sleepiness in particimants (26).

Overcoming the Lizard Brain and Muffling the Resis...
How to Keep Yourself Motivated and Push Through Fa...